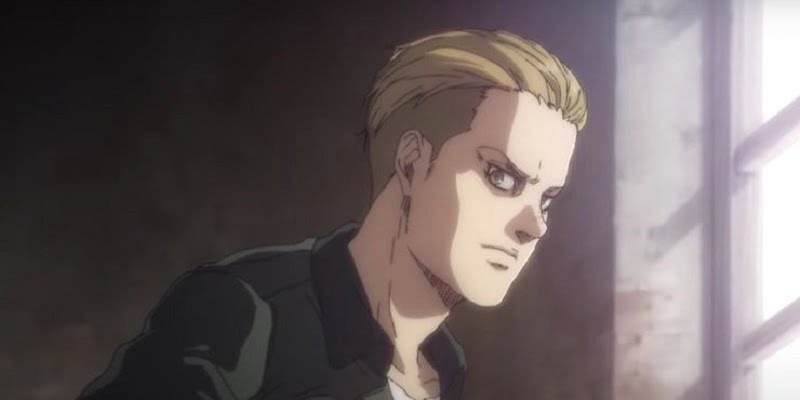 Porco Galliard, the heir to the Jaw Titan, is presented in the Marley arc. Porco is the last warrior candidate to inherit the titan, chosen ahead of his brother, Marcel. He did everything he could to prove to Marley that he was strong enough to replace Marcel and the strongest of the fighters. He has some important quotes from manga and anime.

1. “Our Soldiers Shout Your Name All Night.” Attack On Titans

Soldier Unit returns to Liberia after defeating Middle Eastern Allied Forces. The Marleyan Army celebrates Gabi on their way back because Gabi has an important role in this conflict. The next morning Porco said these lines to Gabi, and he was proud of her.

2. “You’re Doing Nothing. You’re The Weakest In The Group. If One Person Is Left Behind, It’ll Be You.” Attack On Titans

Porco grew up training as a fighter with Reiner, Annie, Zeke, Bertholdt, Pieck, and Marcel. Reiner was overjoyed that he would inherit one of the Nine Titans and attack the Elders of Paradis, but Porco doubted his abilities and said those words to him. As a result, they have been bickering and feuding for as long as they have known each other, especially since it was Porco who turned out to be abandoned.

3. “What the hell is this? Can’t you see I’m a Titan? Is a group of humans going to come and kill me? No. They’re not humans. They’re devils!” Attack On Titans

Yelena traps Pieck and Porco when the Survey Corps storms Marley, so they can’t fight back. Luckily, they were able to escape, and Porco joined the fight. Porco is shocked when they are not afraid of him and fights back. He almost died because of them, realizing how powerful they were. Then Porco said those words.

4. “See How They Celebrate That One Victory. Foolish Children. Ignorance Makes Happiness.” Attack On Titans

Everyone expected Gabi to inherit the Armored Titan early in the Marley storyline, especially after she helped destroy the Middle Eastern Allied Forces. Falco works hard to prove that he is just as worthy as the Armored Titan and defeats him in the race to protect Gabi and let him live a long life. Porco was standing there with his friends, watching the two of them and saying these words.

5. “I Just Saved My Homeland Marley From Losing Armor Because You Messed Up.” Attack On Titans

Reiner was nearly killed during the conflict between the Middle East Allied Forces. The only reason he didn’t do it was because Porco saved him. Porco told her this when she woke up. Told him that he still didn’t see Reiner as a friend even after all these years and blamed him for Marcel’s death.

Attack on Titan – Who would have thought if titan became the most dangerous fighting force in Attack on Titan? There are some of the most interesting Titan Shifter facts we can discuss!

Titan is one of the most dangerous creatures in Attack on Titan. They are powerful and unforgiving creatures. Without common sense, these titans could destroy a city or a country in no time.

But even so, some titans have intelligence known as titan shifters or humans who can freely turn into titans or vice versa. In the past, the titan was considered a curse until finally, it turned into a weapon.

There are some of the most interesting titan power facts that we can discuss! Curious? This is the full review.