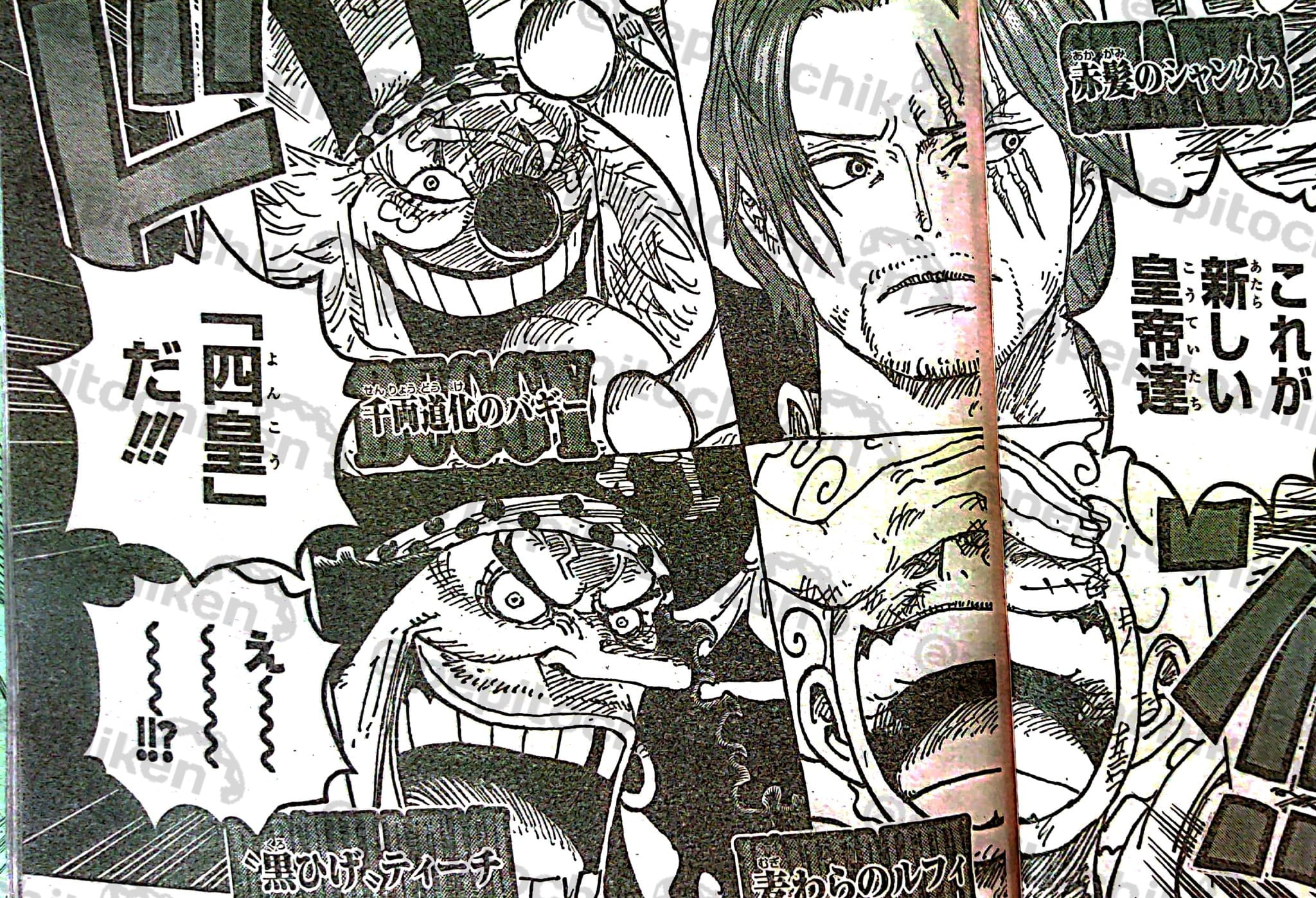 Gorosei: what is this picture?!!! We didn’t allow this to be published..!! And we told them to get rid of the D in the name too!!

Marine: No sir!! We didn’t receive such an order!!

And that picture is from CP0 agent, Mr.Guernica!!

Gorosei: reprint this!! We cannot let something like this be seen by the world!!

Gorosei: stop the publication at all cost!!

Look at this mystic appearance!!

Spread this to every corner my workers!!

The last message from the CP agents at Wano before they were lost was “It’s Big Mom’s ship!!”

As if I’ll let them manipulate information right now!! In this currently changing world…facts are the most intriguing!!!

Morgans: this liveliness!! I’ll never get enough of it!!

【Emperor Kaido and Emperor Big Mom have been defeated!!

The three pirate captains, Monkey D Luffy, Eustass C(aptain) Kid, and Trafalgar Law, managed to take down two of the Emperors who have ruled these seas for decades

And thus the Government has placed a 3 Billion berries bounty on each of their heads, an exceptional amount!!!】

Apoo: hey where is Kid heading? His whole expression changed

Killer: most likely to the Flower Capital

Fa Fa just something I would expect him to do

We are going too! I heard there’s a party today!!

Servants: soups made of cloud ear mushrooms and crown daisies…

Side dish will be pickled foods..

Listen up mistakes are not allowed with treating these important guests

Make sure to grind and heat everything carefully, and tasting for poison three times……

And now, we present to you…

Dishes that we poured our heart into…

Jinbe: Wahahaha we have been waiting for two hours haven’t we!!

They look delicious!! Thank you for your kindness

Things are getting very lively outside huh?

Yamato: this is the first time I at a festival!! It’s great!!

Brook: YEAH!! Now please turn your attention to our next song, beloved by brother Oden…

Robin: Tengu-san!! How do you know my name…

Hitetsu: these are my collections…aren’t these girl kokeshi dolls cute

Why are your collections here?

Hitetsu: this is my secret hobby room..

…and also where I was imprisoned for several years….

Robin: imprisoned?! Who are you exactly?! Are you not a swordsmith…?

Hitetsu: sword crafting is something I am talented at, but it’s just my hobby

Since Politics really wears one out..

Hitetsu: my name is Kozuki Sukiyaki! The father of Kozuki Oden!!

I was the one who let Orochi took over this country…

To whom do I have the right…to tell them that “I’m still alive”?!

I have thought about committing seppuku right then and there…

Robin: it should be here in this country!!

The poneglyph in Alabasta kingdom said so

And indeed it is

I was staying round on purpose…..

Ryokugyu: I told you don’t do it didn’t I?! Someone in my position can’t afford to be taken down by mere commanders!!

The navy doesn’t have any spare manpower for “clean up” right now you know….and just as I thought, you guys are…!!

Den den Mushi: …this is…

Send a warship over!!

Ryokugyu: Don’t let Sakazuki-san find out about this alright?! Bye

Ryokugyu: I love his style of doing things in extreme ways…

…That’s what I want him to say to me…after I take this kid’s head..!! Rahaha

Citizens: who is that

Luffy: don’t tell the people of Wano about me

Momo: but why? You’ll surely be recognized as a hero…!!)

Luffy: Alright!! To the meals of tomorrow…here we go!!

Let’s party!! Drink the night away!!

Hyo: pirates are a flashy bunch aren’t they

I’ve never seen a party like this…The scale is unbelievable..!!

Kid: the hell you getting me involved for!!

I came here to kill you…

I have no idea what happened outside but…..

Kid: … these are the new emperors

But the Navy has no time for that you damn kids….

The outside world is a mess….