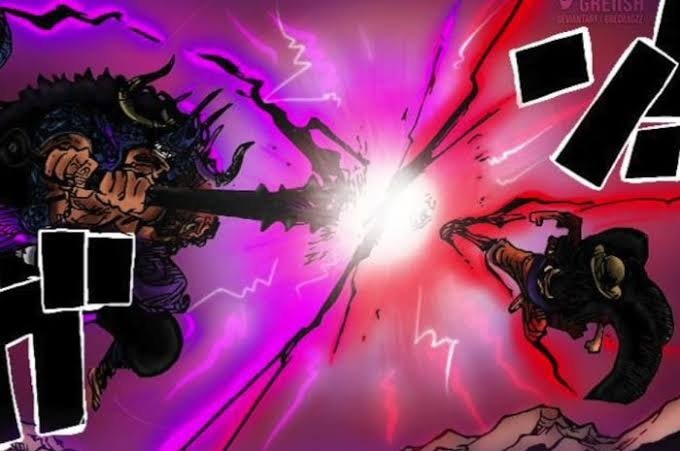 Full summary, thanks to redon from Arlong Park Forums.

Germa 66’s Ahh… Emotionless Excursion, Vol. 5: ““Pudding Punch” to the guys who bullied Sanji-san!”. In the cover we see that Pudding is punching Niji and Yonji (that are still captive in Mont d’Or book) for bullying Sanji.

Chapter starts where the previous one ended. Momonosuke tells Yamato that he already talked with Zunesha, but that he doesn’t know any more details about the crimes Zunesha committed in the past. As Momonosuke says this, we see Zunesha is next to the World Government ships (but hasn’t attacked them yet).

I’m waiting for your orders…!!

I’ve come… to fight alongside you!!”

You can talk to the elephant!!

Just as Oden expected!! You are the one who will bring this world to its dawn!!”

However, Momonosuke doesn’t seem very convinced about it.

Momonosuke: “After reading my father’s journal…

I know I absolutely must not die.

But the most important page in the journal was ripped out by father’s own hands!!

What did he and Roger see and laugh at the final island!?

I have no idea what their real goals are!!

Father doesn’t predict the future!! Even if he’d be here today…

He’d still want to open the border of this country!?

I feel that I wouldn’t want to open “Wanokuni” if it means putting people in danger!!!

After these words, Yamato looks worried at Momonosuke.

Cut to the 3rd floor of Onigashima’s castle. Fukurokuju has lost consciousness, he’s on the ground completely burned. Raizou throws himself to the ground screaming and starts spinning to put out the fire.

[Battle in the connecting corridor.]

Jinbe arrives at the area and sees wounded Raizou on the ground.

The “preparation” is almost done.”

Cut to the “Treasure Hall” on the 2nd floor of the castle. We see that Orochi is very nervous and angry becouse Fukurokuju doesn’t appear, and he wonders if he left Onigashima alone. He also wonders what is going on with Kazenbou. Komurasaki continues playing biwa.

Why are you still playing? Stop at once!!!”

And why do you always wear a mask!?

Suddenly, the roof collapses over Orochi, who is trapped under the rubble. Orochi tries to get out but he can’t and asks Komurasaki for help.

What are you looking at Komurasaki!!?

Komurasaki: “I stabbed you with a “Kairoseki” stone so you can’t transform into a monster…”

But didn’t you say that you loved me!!?”

Komurasaki: “Love you? How amusing… There’s no such feeling in my heart.

Komurasaki: “This song that you like so much is called “Moon Princess”.”

Hiyori remembers the moment when her father told her that he liked that song and she replied that she will learn to play even better. After this, she finally reveals her identity to Orochi (but she doesn’t take the mask off yet).

Hiyori: “This is the song that “Kouzuki Oden” loved.

The song my father loved.”

Hiyori: “How can I force myself to smile?”

Cut to the basement of the castle, Izou and the CP0 agent with the mask have attacked each other at the same time. Izou shots him in the torso and the agent uses Shigan against Izou.

They both fall to the ground badly injured. CP0 boss is sitting on the ground, it seems that he is injured too but not as much as his partner.

CP0 boss approaches to his partner while he laments.

CP0 boss: “Why are the remnants of Shirohige’s crew helping that kid…!!?”

Maha: “Hurry up and get Nico Robin…”

CP0 Boss: “What are you talking about, “Straw Hat” is currently fighting Kaidou!!

Do you want me to get in the way of Kaidou’s fight!? It’s impossible.”

But the fact that it is a world’s “top class” battle is why this is so dangerous.

You must understand… that this order is given to prevent what might happen.”

As the CP0 agents speak, X Drake is getting up again (he’s injured). Izou is still unconscious on the ground.

Den Den Mushi: “We only know rumours about it though…”

In another area of the basement we see that Usopp and Hamlet are trying to find a way to escape before the castle collapses (Hamlet carries Kinemon and Kiku). Nekomamushi, Carrot and Wanda are going inside the dome because outside they could fall off the island now that it’s moving a lot. We also see that Franky has managed to grab Zoro in the air before he falls off Onigashima and now he’s lifting him to the ground with his cyborg arm.

Nami is talking to Zeus near the “Animal Kingdom Bath” on the forehead floor.

How far has the fire expanded in the castle…!? I hope Usopp is alright!!”

Who is more important to you, Big Mom or me?”

They both enter to the bath. Tama and Speed are there too with Marco, who is healing Komachiyo and Hihimaru.

Marco: “Don’t worry, everything is OK. Be careful with the debris that are falling!”

Speed: “Please stay behind me!!”

Marco: “Don’t be distracted yet.

We are on the most dangerous island in the world!!”

Cut to the area where Big Mom was fighting Law and Kid. Kid Pirates and Heart Pirates are still cheering but then rocks start falling from above. Kid and Law are lying on the ground, exhausted from their battle against Big Mom.

the one who ends up coming down…

We won’t stand a chance of winning anyway…”

As they talk, we see that Luffy and Kaidou are still fighting. After a new clash with Color of the Supreme King Haki, the battle stops for a few seconds.

Kaidou: “Have you noticed!?

Jaggy and the others did it…!! They’re awesome.”

A small flashback begins where Kaidou remembers the first time he met Big Mom. Kaidou’s flashback is from his perspective, so we can’t see how he looked like at that time. But we can see a beautiful and young Big Mom.

Hello? Do you know how to speak?

Mamamahahaha!! How old are you?”

Is this your first time joining Rocks?

The woman who will be the king of the seas!!!

Back to the present, Kaidou enters in his “Naki Jougo” mode (Tears in his Beer).

Kaidou: “If you think about it…

Right when we just sworn to go and get the “One Piece” together, this happens~~!!!”

As Kaidou cries, Luffy goes for him while he transforms. Kaidou receives a fast punch with Color of the Supreme King Haki in his face.

In an AMAZING double page, Luffy uses a new attack with which he hits Kaidou with multiple “Jet Culverin” at once with Color of the Supreme King Haki.

Luffy: “I don’t care about your ambitions!!!

Especially when they make people of this country starve!!

I won’t stop attacking you until I run out of strength!!!”

Where do these punches come from…!!!”

Luffy: “I will definitely kick you out of “Wanokuni”!!!!”

End of the chapter.