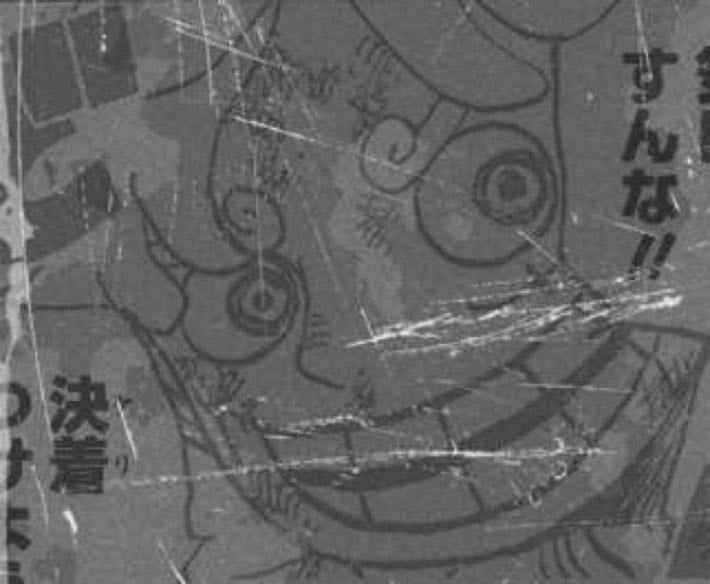 Germa 66’s Ahh… Emotionless Excursion, Vol. 8 “Mom is on an expedition. Research started!!” On the cover, Oven has left the prisoners’ book (open on Niji and Yonji pages) in a room where some of his brothers/sisters are (Prim, Kato, Brownie and Anana). As Oven says goodbye, his brothers/sisters prepare to start all kinds of investigations on Niji and Yonji’s bodies (using knives, saws, hammers, lasers…).
Chapter starts with Luffy talking, although we cannot see him close-up. The sound of the drums is getting louder.
Luffy: “What happened? I…
Why? …How am I able to get up if I lost.
I suddenly feel so much fun…
Ahahahaha!!”
As Luffy speaks, we see in a distant shot that black lightnings come out of Luffy’s body.
Zunesha is still with the World Government ships in the sea near Wanokuni. Momonosuke looks at the roof of Onigashima, he’s very upset and even trembles.
Momonosuke: “Joy Boy…!?
Do you mean Luffy!?”
Yamato: “Is that… what Zunesha said!!?”
In the “Pleasure Hall” of the Leftbrain Tower, we see that Some is taking care of Sanji (he is lying on a futon). Suddenly, Sanji gets up because he senses something and looks up.
Some: “Eh!
Kyaah!!”
Sanji: “…!!
Hah, hah…
Luffy…!?”
On the Live Floor, Luffy’s allies are also feeling something. Kid, Law and Hyougorou look up.
Kid: “What!?”
Hyougorou: “Ah…
Is that Straw Hat…!?”
Marco also feels something and tells it to Nami and Tama, who are crying as they hug.
Marco: “Straw Hat…!?
Hey! He is still breathing.
Nami: “Is Luffy alive!!?”
Tama: “Is he really alive!!? Aniki~?”
Hiyori: “Father, are you fine with every body talking bad about you?”
Oden: “Yeah, I’m fine with it.
Why you ask…?
That’s because…
I’ve got you guys by my side!!”
Hiyori: “Really!? Then let’s stay together forever.”
Back to the present, Orochi talks now.
Orochi: “Oh yes!!
Oden was such a great samurai!!
As a “Shogun”, I shall honor your father…”
Hiyori: “…”
Hiyori takes off her mask and yells in anger at Orochi while she cries tears of pain.
Hiyori: “My name is “Kouzuki Hiyori”!!!
Be silence, you insolent man!!!”
Orochi: “Ehhh!!!”
Hiyori: “Even at times when I had an empty stomach and putting on broken fabric!!
I live proudly up to my father’s name!!
You shouldn’t be in “Shogun” position for even just one day!!
You are a pathetic fool!!!
And as your foolishness grew, so are the innocent lives perishing in vain!!”
Orochi is very scared after Hiyori’s words.
Orochi: “You’re not going to do anything to me, right!!?
Revenge isn’t very popular nowadays!!
And even if you kill me, you have no chance of defeating Kaidou!!”
Suddenly, a little version of Kanjuurou’s Kazenbo returns to where Orochi and Hiyori are.
Kanjuurou’s Kazenbo: “Orochi-sama…”
Orochi: “Huh?”
Kanjuurou’s Kazenbo: “I… fai… led…”
Orochi: “Kanjuurou!?
You returned at the right time!! This turns the tables!!
Burn that woman until she dies!!!
What a tragicomedy! Remains of the “Kouzuki”, have you seen it?
This is the “luck” of the strongest!!!”
Kanjuurou’s Kazenbo: “Orochi-sama…”
Orochi: “Eh!? Hey!!
What the hell are you doing!!!
Gyaaa~~~!!?”
Luffy pulls Kaidou up (Kaidou’s eyes popping out, like a cartoon) and drags him easily to the roof. Luffy then increases his muscle mass (as in the leaked picture) and starts spinning wildly Kaidou’s body. Kaidou’s face looks again like a cartoon, his eyes are popping out one more time.
Luffy stops spinning and starts slamming Kaidou back and forth on the ground, until Luffy lets go him. Kaidou gets up dizzy, with a bump on his head and little stars coming out of it (again like a cartoon). Luffy can’t stop laughing.
Luffy: “Hah. Hah.
Ahahahaha!!”
Kaidou: “…!!
Straw Hay…!! You are alive…!!
Thank you.
“Bolo Breath”!!!”
Luffy: “Ahahahaha!!
Eh?
Aaahhhhhh!!!”
Luffy (who has returned to his normal form) is lying on the ground laughing non-stop, but when he sees Kaidou’s “Bolo Breath”, he screams surprised. His eyes also pop out like a cartoon, but it’s more excessive than Kaidou’s (Luffy acts like Jim Carrey’s character in the movie “The Mask”).
Luffy grabs the ground with his hands and stretches it out, causing the ground turns into rubber. Kaidou’s “Bolo Breath” hits the ground, but since it’s now rubber, it doesn’t get destroyed and holds back the attack. Luffy changes back to his muscled form and pulls the piece of ground, causing the “Bolo Breath” bounces back to Kaidou. There’s a huge explosion.
We finally see Luffy full body clearly. His physical appearance is almost the same as always, although his shirt is now white instead of black (we’ll see the actual color that Oda gives to the shirt). His hair now looks like flames and he has that “vapour collar” around his neck and under his armpits (like in Gear 4 form). His eyebrows are now curled (similar to Sanji’s) and the pupils of his eyes have changed (check leaked picture to see Luffy’s face).
Luffy laughs non-stop again as Kaidou stands up. “Gear Fith” is officially presented.
Luffy: “Ahyahyahya!!”
Kaidou: “…!! I’m sorry for what happened earlier, I was STUPID…!!
I didn’t want to win like that.”
Luffy looks at Kaidou with determination and a smile on his face.
Luffy: “Don’t mention it!!
Let’s end this!!!”
End of the chapter.