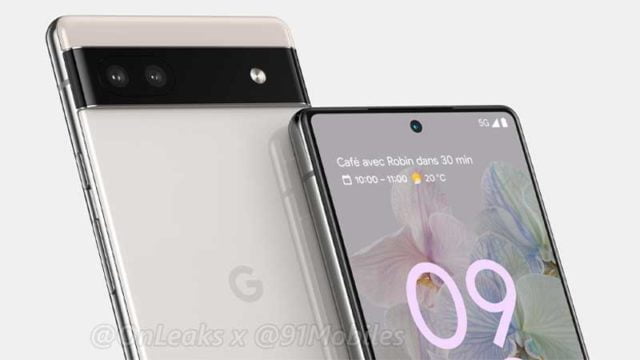 Sometimes, to appeal to more consumers, manufacturers will present affordable versions of their top line. Google itself is the same, and this time we get a leaked render for the Google Pixel 6A variant!

Presenting a more affordable variant for the flagship series is certainly nothing new! Long ago, we’ve seen Samsung release the Galaxy SIII Mini, a mid-range alternative to the once very popular SIII!

And now, we hear the news that Xiaomi is preparing 12 Mini, a cheaper variant featuring Snapdragon 870. This is certainly a trick to attract consumers who want to experience top performance but at a low price.

Google is no different from other smartphone manufacturers. Not long ago, an official render circulated that came from a cheaper line, namely the Google Pixel 6A. How does this smartphone look?

The design is identical to its sister.

The leaked rendering of the Pixel 6A comes from a collaboration between a Twitter account called OnLeak and a site called 91mobiles. These renders come with a wide variety of angles, and the image quality looks very detailed.

From these various pictures, including the ones you can see above, you can see a very identical design to his brother. The bump characteristic on the camera looks precisely similar to the Pixel 6 line.

The rest visible some minor differences, one of which is color. The regular version looks like a two-tone model that presents a different color on the top, while the Pixel 6A brings the same color. The size also looks smaller.

The headphone jack or plug that you use to connect your favorite earphones and headphones is starting to be removed from the Pixel A-line. This is quite a strange decision.

The previous series, such as the Pixel 5A, still use a 3.5mm jack, whereas the main variant, Pixel 5, does not have that plug. It’s not clear why, but this is a feature that consumers are still looking for.

However, the loss of the headphone jack is not the end of the world! From the author’s experience, the built-in DAC of most smartphones presents poor sound quality. This leads to buying an external DAC such as the iBasso DC02 or Tempotec Sonata HD Pro.