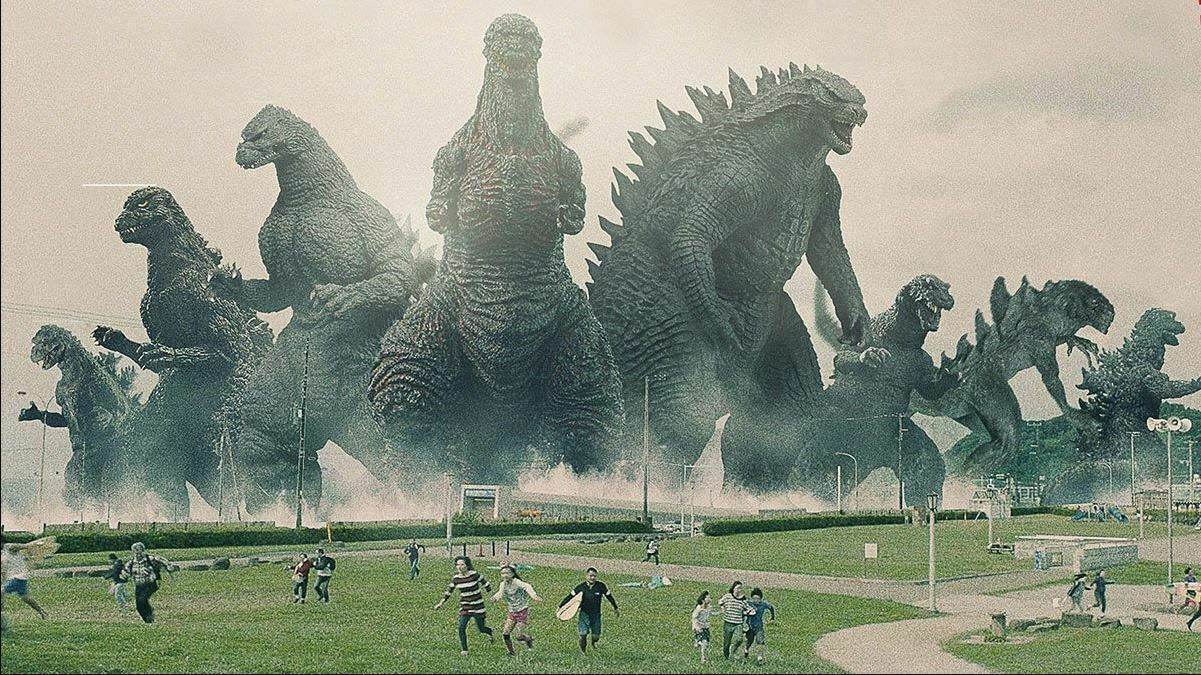 9 Godzilla World Kaijus, The world of Godzilla is filled with various kinds of kaiju or dangerous giant creatures. However, it turns out that some of them appear because of human activities that disturb their sleep — or even create monsters themselves! Wow, how come?

Godzilla vs. Hedorah (1971)
Godzilla: The Last War (2004)
Originally, Hedorah was an alien from the constellation Orion who fell to Earth after sticking to a comet. However, when he arrived on Earth, he grew into a giant due to consuming various kinds of pollution created by humankind, from buildings ranging from tadpoles to large and can fly until finally higher than Godzilla.

Due to the creation of half of the pollution and trash, Hedorah can spit out acid and quickly, which can attack her opponent’s body and will typically only attack her body.

Ebirah, Horror of the Deep / Godzilla vs. Sea Monsters (1966)
Godzilla: The Last War (2004)
As you might expect, this kaiju has the form of a giant shrimp or ebi. Ebirah was born because of the Red Bamboo terrorist organization, which operates secretly on remote islands called Letchi Island.

Red Bamboo could protect their ships from Ebirah’s wrath by pouring a special liquid made from the island’s fruit, while the monster’s giant claws would control other boats that came and went without it.

Godzilla then fought him twice. In his final battle (before Final Wars), Godzilla broke Ebirah’s claws, and he was forced to shoot himself.

Godzilla vs. Biollante (1989)
When Dr. Genichiro Shiragami, Erika, died in a bombing case, Genichiro crossed his daughter’s cell with a rose, Erika’s favorite flower. His experiments succeeded in creating plant mutations with a human-like mind, but this consciousness can only be detected by people who have psychic abilities.

Then when Mount Mihara erupts and creates an earthquake that enjoys many plants, Shiragami decides to cross a sample of Godzilla’s DNA (which he obtained from being given to him by the Japanese Self-Defense Forces in an attempt to make Anti-Nuclear Energy Bacteria weapons) to create a rose plant with the ability to regenerate. However, Shiragami’s experiment this time created a monster plant that continued to mutate into a giant monster.

Godzilla vs. Destoroyah (1995)
Kaiju Destoroyah only comes from fossils of a group of microscopic crustaceans from ancient times. But when humanity killed the first Godzilla using the Oxygen Destroyer in 1954, it caused them to come back alive and even mutate unbelievably fast. The figures of Destoroyah’s monsters were born, merged, and caused significant damage.

At first, he fought Godzilla Junior, but a mutation changed them to make Destoroyah turn into an even more giant monster. He managed to kill Godzilla Junior and make Godzilla an adult. But thanks to the help of the Japanese Self-Defense Forces and Godzilla’s ultimate attack, Destoroyah was finally defeated.

Rodan (1956)
Ghidorah, The Three-Headed Monster (1964)
Astro Monster Invasion (1965)
Crush All the Monsters (1968)
Godzilla vs. Megalon (1973)
Godzilla vs. Mechagodzilla II (1993)
Godzilla: The Last War (2004)
Godzilla: The King of Monsters (2019)
In all the films, Rodan is told as a few ancient creatures (or especially Pteranodon) who survived the extinction of the dinosaurs due to a meteor at the end of the Cretaceous Period. He then mutated due to nuclear radiation created by humans.

Godzilla Attacks Again (1955)
Crush All the Monsters (1968)
Godzilla vs. Gigan (1972)
Godzilla vs. Megalon (1973)
Godzilla vs. Mechagodzilla (1974)
Godzilla: The Last War (2004)
Like Rodan, Anguirus is one of the ancient creatures that monitors the old and mutates due to nuclear radiation.

Son of Godzilla (1967)
Godzilla: The Last War (2004)
A species of praying mantis as high as two meters from Sollgel Island. When an UN-sanctioned experiment on the island crashes, a heatwave and a storm turn three locusts into 50-meter weather kaiju, known as Kamacuras.

Godzilla kills two Kamakura who threaten Minilla’s life, while another is captured and killed by an even more deadly predator, the giant Kumonga spider.

Godzilla vs. Mothra (1992)
Before present-day humankind, mentioned in the movie Godzilla vs. Mothra, is an ancient human civilization that already had advanced technology. They created climate control devices that angered the Earth.

Mothra’s evil clone, Battra, was born to destroy him. After destroying the device, Battra continued his rampage to eradicate all civilizations and annihilate humanity because he believed that humans were a “disease” that perished on this planet.

Godzilla’s appearance may continue to change depending on when the film is released, in animated or live-action form, or produced by Japanese or American studios. But for most of the existing film titles, it is told that Godzilla is an ancient lizard that has slept for thousands of years. Then he wakes up due to nuclear weapons testing and mutates into a giant due to the side effects of human nuclear technology.

9 Godzilla World Kaijus, Those are the nine Godzilla kaiju that was born due to human activities. Which do you think is the scariest?