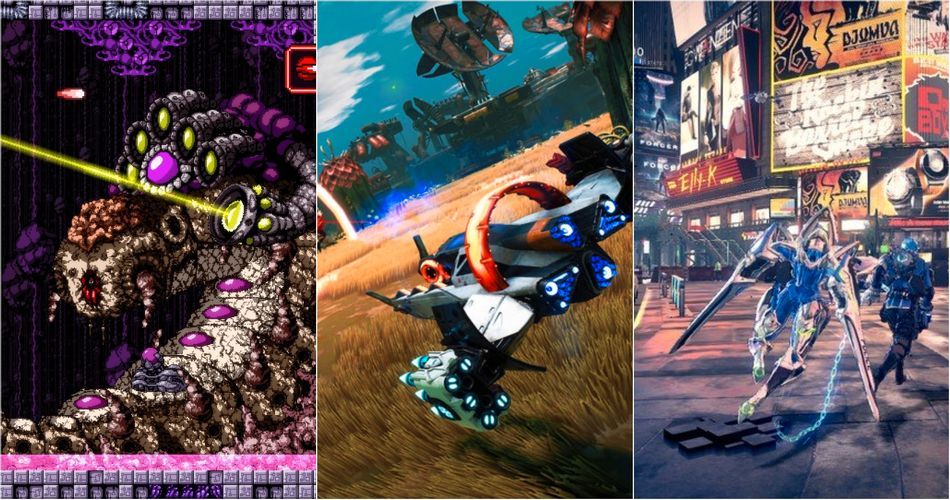 Nintendo’s famed bounty hunter Samus is set to blast her way onto Switch with Metroid Dread, which will, eventually, be joined by the anticipated sci-fi epic, Metroid Prime 4. Despite this, though, the console’s library remains somewhat scarce with regards to straight-up sci-fi. For the most part, colorful fantasy-themed games reign supreme on Switch, many of which sprinkle in some of these traits a la Xenoblade.

Even these titles, however, often shy away from the rich, sleek, and darker science fiction elements found in games like Metroid, Cyberpunk 2077, or Mass Effect. Still, Switch’s arsenal of sci-fi romps is building, and there are more than a few terrific games that science fiction fans should enjoy on the machine.

In many respects, indie developers have been on the frontier of the current sci-fi gaming scene, bwith efforts that often push boundaries and add new twists on the genre. Case in point: System Era Softworks’ Astroneer. The game is a sandbox romp that has players assume the role of a wandering astronaut who explores vast, procedurally generated planets.

The name of the game is to scour the alien wilderness in order to gather items used to build, expand, and simply survive. This interplanetary mission can be undertaken either solo, or by teaming up with a friend. The result is a deceptively deep survival adventure that’s both epic and whimsical. Generally speaking, Astroneer feels akin to a more colorful, stylistic version of The Martian.

While Nintendo’s sci-fi hit Star Fox remains MIA on Switch, Ubisoft Toronto flies in to at least partly fill the black hole void with this similar space odyssey. Not only do these planetary and outer space flights feel Star Fox-esque, but the animal space hero himself is featured in the Switch version, complete with his iconic Arwing.

Even when disregarding this cameo — and the added flair of interchangeable toys-to-life ships — 2018’s Starlink shines as an overlooked space-shooter in its own right. The journey is full of solid mechanics, fun action, rewarding progression, and some colorful worlds, traversable from outer space in real-time.

This satisfying blend of future and past harkens back to the glory days of the NES, with charming pixel art and button-mashing action. But beneath the seemingly simple exterior lies appealing gampelay and a gripping sci-fi-fantasy story reminiscent of Studio Ghibli’s Castle in the Sky.

Shades of Star Wars can also be felt here, as players take the role of the energy sword-wielding “Drifter,” who fights their way through tough monsters; honing their skills and tactics along the way. While the journey is fairly brief at eight hours, Heart Machine crams loads of thrilling gameplay and memorable moments in this dark sci-fi.

While many studios have sought to emulate Metroid and Metroidvania-style adventures, this 2015 cult hit particularly stands out with its retro feel and rewarding run-and-shoot gameplay.

Axiom Verge proves a faithful and worthy homage to Nintendo’s classic IP, while staying fairly authentic in its style. With crisp mechanics, satisfying upgrades, and tough but accessible gameplay, this sci-fi shooter is a great gap-filler for Metroid fans awaiting Samus’ next big release.

Given the sleek visuals and epic nature of this expansive online game, some were surprised to hear of the 2018 release of Digital Extremes’ Warframe on Switch. And with a slew of add-ons and refinements that same year, this port (courtesy of Panic Button) couldn’t have come at a better time.

In Warframe, players lock-and-load as an ancient warrior race known as the Tenno, awaken from cryosleep only to find themselves at odds with various clone and robotic factions. Convoluted mod system aside, this free-to-play game is a thrilling, and frankly overlooked third-person shooter on Switch. Players can expect tons of fun collectibles, unique fighters, and ample action.

Take some addictive hack ‘n’ slash gameplay, flesh it out with a post-apocalyptic premise, and decorate it with retro 80s flair. RAD might be the result.

This zany roguelike from Double Fine Productions holds on with its tentacles and never lets go, pummeling players with countless mutant foes, rich wasteland locales, and frantic combat. The increasingly absurd critters must be staved off by one’s own arsenal of mutated, toxified powers. These amusing abilities are collected and upgraded throughout the procedurally generated journey.

For Nintendo fans that missed the boat (or submarine) with regards to 2K’s underwater odyssey, there’s never been a better time to take the plunge than 2016’s BioShock package.

This great collection includes upgraded versions of the robust classics, BioShock 1 & 2, along with BioShock Infinite and DLC content. The result is 50 hours of deep, enticing FPS gameplay and a gripping Orwellian story. The lack of BioShock 2 multiplayer aside, this is truly the definitive way to experience this dystopian epic for new explorers and veterans alike.

Seemingly making up for lost time on Nintendo platforms, id Software and Bethesda come out guns blazing with their Doom renditions on Switch. Following their 2016 return to form, this awesome sequel simultaneously takes its place as one of Switch’s best shooters and sci-fi games.

Not only does this version largely bring the same explosive, gory experience, but it does so with its own appeals by way of handheld functionality and surprisingly great motion controls. This apocalyptic demon-slaying romp serves to remind Nintendo fans of this FPS’ legacy.

While the Bethesda classic Fallout is absent on Switch, this comparable ARPG from Obsidian is a more-than-suitable replacement, while bringing some Mass Effect vibes as well. The Outer Worlds feels like an interactive sci-fi odyssey as much as a game, with deep lore, imaginative locales, and a branching storyline.

Of course, there’s still plenty of meaty gameplay to sink one’s teeth into over the course of this interstellar voyage. Set in an alternative future under the boot of mega-corporations, players take the role of the Stranger, an enhanced human who sets out to save the species. Traversing the colorful planet star system Halcyon, the Stranger will meet different factions and fight various foes while gaining power and abilities.

While the sleek visual style is captivating, the intense, fluid combat really shines here, as players spend much of the 20-hour journey slicing and dicing alien invaders. Its arcade madness is balanced with much depth and variety via unique weapons and a skill tree. In short, Astral Chain feels like an awesome fusion of Dynasty Warriors and The Matrix.